These are absentminded errors, and they happen to all of us. They have also been termed action slips, and this term is useful because it points more precisely to the nature of these errors. Let's look at the characteristics of action slips:

Other types of action slips are:

You can see from all this that these everyday errors occur in the context of action sequences - that is, sequences of actions that we have practiced so often they have become automatic. Dressing, undressing, washing, making coffee or tea, even making quite complicated recipes - these are all common examples of action sequences.

You can see why action slip is therefore a good name for these types of error.

Is there anything we can do to minimize action slips? Well, the standard advice is to pay attention to what you're doing, but of course the whole point of action sequences is that they free our mind from needing to pay attention, so this is not a strategy I particularly recommend. However, if there are some action slips that you are particularly prone to, you might want to try this.

The most useful thing you can do is simply be aware of the circumstances that set you up for such errors. Then you can either:

This article originally appeared in the December 2003 newsletter. 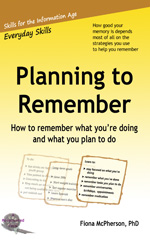