Broadly speaking, a concept map is a graphic display that attempts to show how concepts are connected to each other. A concept map is a diagram in which labeled nodes represent concepts, and lines connecting them show the relationships between concepts.

There is one type of concept map you’re probably all aware of — mind maps. Mind maps are a specialized form of concept map popularized very successfully by Tony Buzan.

The essential difference between a mind map and the more general concept map is that in a mind map the main themes are connected only to this single central image — not to each other. In a concept map, there are no restrictions on the links between concepts.

Also, the connections between concepts in a concept map are labeled — they have meaning; they’re a particular kind of connection. In a mind map, connections are simply links; they could mean anything.

Mind maps are also supposed to be very pictorial. In Buzan’s own words:

“The full power of the Mind Map is realized by having a central image instead of a central word, and by using images wherever appropriate rather than words.”

Concepts in a concept map, on the other hand, can be (and usually are) entirely verbal. But the degree to which you use words or pictures is entirely up to the user.

The chief usefulness of mind mapping, I believe, is when you’re still trying to come to grips with an idea. Mindmapping is good for brainstorming, for outlining a problem or topic, for helping you sort out the main ideas.

Concept maps, on the other hand, are particularly useful further down the track, when you’re ready to work out the details, to help you work out or demonstrate all the multitudinous ways in which different concepts (and a “concept” can be anything) are connected.

Concept maps are more formal than mind maps, and are better suited to situations where the concept is to be shared with others. Mind maps are considerably more personal, and are often not readily understood by others.

Both mind maps and concept maps are good at clarifying your thoughts, but because of the greater formality of the concept map — the need to be more precise in your connections — concept maps are better at showing you exactly what you don’t understand properly.

Which is why concept maps take a while to get right!

This is a very important point that I should emphasize — hardly anyone ever gets their map (mind or concept) right the first time. In fact, if you did, you probably didn’t need to construct it! It’s the redesigning that is important.

But concept maps can come in different flavors — from the more formal, to a visual display which simply use the basic idea of nodes and links. You can see some examples, constructed using cmap, at https://cmap.ihmc.us/cmaps-around-the-world/.

You can also learn more about concept maps at http://cmc.ihmc.us/CMC2004Programa.html (which has a number of conference papers available in pdf format). 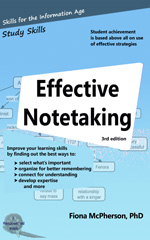