Most people find numbers — phone numbers, personal identification numbers, dates, and so on — more difficult to remember than words. That is, of course, why businesses try to get phone numbers that correspond to some relevant word. The system whereby this is possible — the linking of certain letters to the different digits on a telephone calling pad —is a kind of coding mnemonic. Basically, coding mnemonics are systems that transform numbers into words.

Because words are much easier for most of us to remember, this is a good way to remember numbers, but it’s not the only one. If you have a facility for numbers, or an existing store of memorized numbers (dates, baseball scores, running times, whatever), you can use those memorized numbers or your understanding of mathematical patterns to remember new numbers. In one well-known experiment1, for example, the subject was able (after 250 hours of practice!) to recall up to 82 digits after hearing them at the rate of one digit a second. This subject was a runner, and used his knowledge of record times to make the digit strings more memorable.

The difficulty with a coding system is that you can’t use it effectively until you have fluently memorized the codes, to the extent that the linked letter (if encoding) or digit (if decoding) comes automatically to mind. This requirement makes this sort of mnemonic the costliest of all the mnemonics — that is, it takes the most time and effort to master.

Here is the best-known digit-letter code — it’s important to note the system is based on sound rather than actual letters, so various similar sounding letters are regarded as equivalent:

In the study situation, there is quite a lot of numerical information that you might need or be interested in learning. Historical dates; mathematical formulae; geographical facts. Let’s look at how we can combine three different mnemonics to remember the lengths of the ten longest rivers (in miles):

First, let’s use the coding mnemonic to convert the lengths:

They’re not brilliant, I know. Sometimes numbers will fall nicely into meaningful words, but more often than not they won’t. Still, you’ll be surprised how much these rather weird phrases help.

Now we need to use the keyword mnemonic to turn the names of the rivers into something concrete and familiar.

Yenisei-Angara — nice anchor (nice is not concrete, but you can attach it by always thinking nice anchor when visualizing it)

Hwang Ho — hanging (image of a noose hanging from a gallows)

You’ll notice I didn’t give a keyword for Amazon; I felt the female Amazon would provide an adequate image.

Now we can use the pegword mnemonic to provide our ordered list. So we tie our keywords to the pegwords to produce the following images:

Once you’ve worked on visualizing these images and got them well down, you can then connect the images to your sentences. Don’t worry if your images aren’t as clear as you think they should be; I rely equally on the words as much as the images — but it helps to visualize as much as you can while thinking on the words.

Now you’ve got these word-images (and it really does take very little practice), you can stick the coded phrases on.

It all sounds very strained and unnecessarily complicated if you simply read all this! You absolutely cannot appreciate this method until you try it. It really is much simpler than it appears (although still not a simple strategy). However, it is vital that you build up the strategy step by step. In this case, for example, you must be fully confident of the standard 1-10 pegwords (1 is a bun, etc) first; then you fix the rivers to the pegwords firmly; and finally you attach the coded phrases. 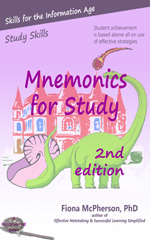